Initial reactions to Poetry And Terror:

“Coming to Jakarta (1988) was probably the first poem to actually shock readers since The Waste Land (1922). Both poems are tied to cataclysmic events—The Waste Land to the horror of World War I and Jakarta to the under-reported massacre of hundreds of thousands of Indonesians in 1965, with encouragement and support from the United States. Poetry and Terror is a welcome addition to the growing literature surrounding Peter Dale Scott’s masterpiece. Calling it an elegy ‘for the passing of an era when many had hopes for major changes in America,’ when America still had the reputation of advancing ‘universal principles,’ Coming to Jakarta is now seen as an early warning that democracy in America has been abridged due to encroachments by the deep state. Most of this book is taken up with an extended interview of Scott by a former student, Freeman Ng, which is essentially a close reading of Jakarta. More important, in Poetry and Terror Scott asserts his belief that by turning from the prose exposés for which he had long been known to the writing of poetry, he had found a way to release the hidden half of what he calls the double self. The protocols of academic argument stood in the way of his seeing clearly and therefore stating his own connection to the truth of the deep state’s activity in Indonesia. The experience left him with the conviction that in all art we have ‘a form of corrective alterity,’ or, more precisely, ‘that poetry can be part of humanity’s approach to truth’ and thereby to the recovery of justice.”

“Coming to Jakarta was one of the most important public poems of the late twentieth century. Not identity politics, not liberal mea culpa, it offered information the mainstream media would not disseminate, and then pondered the psychic cost of knowing such things but being helpless. Good, then, to have a book that explores the background of the poem, and also testifies, through reflections on Milton and Milosz, to Scott’s growing faith that poetry can indeed change the world.”

“Most of this book involves a close commentary on Scott’s Coming to Jakarta:  A Poem About Terror (1988), and a meticulously documented analysis of the 1965 Indonesian massacre on which the poem is based.  He reveals that it was drafted in the six weeks after the election of Ronald Reagan in 1980, when Scott feared that his and other activists’ efforts ‘had been at best fruitless, or perhaps even counterproductive.’  Such fears are now widespread; what makes Scott unusual is his faith that poetry can both express and alleviate such doubts.’”

“Little could be more timely in our ‘fake news’/’post-truth’ moment than the publication of Poetry and Terror. Scott’s reflections on the harrowing composition of his breakthrough book of poetry Coming to Jakarta and its aftermath face us with the ‘news that stays news’ uncovered by his courageous, dogged probing into the murderous corruptions of power and the complicities of the self, and bear witness to just what must be undergone to free the truth—from suppression and repression—that it might set us free.” 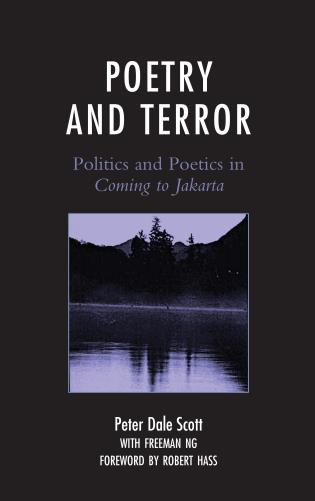